“I grew old in a few seconds, and now everything is bland and flat. I know that there is nothing else, because if there were, I would see it.”
Frida Kahlo

I’ve been trying to decipher a strange connection I feel to Frida Kahlo for years, until I finally realized that my feeling don’t need to be rationalized. However, what I did figure out is that I have an utmost respect for Kahlo’s infamous ability to proudly display her martyrdom in her art.

Although I’m working on this I do have a tendency to see the world in black in white; I see people as either fighters or wimps. I do believe that people choose which category they will fall into. To paraphrase Confucious’ statement about becoming a superior man I believe that if one wants to become a fighter all one needs is to make a decision to be one. A fighter is somebody who’ll survive any situation life throws at him and won’t complain about it. A wimp could fall apart from a slightest misfortune. I’ve tried both of these roles and realized early on that I don’t want to be a wimp. I’ve always hated being pitied or even be seen as somebody in the need of pity.

I chose to become a fighter and I try to bring forth my personal philosophy into my art. I rarely display my weaknesses in my art. As a general rule, I don’t feel like painting when I’m sad. I don’t want to have a constant reminder of some sad moment hanging on my wall. I don’t want to be remembered as someone weak. Most days I don’t even give myself an option to be weak. I come from a long line of strong women and I feel that if I were to fall apart I would somehow betray their legacy and be a disappoint to them.

P.S. I think the only artwork that portrays me as a vulnerable being is my self-portrait a la Klimt 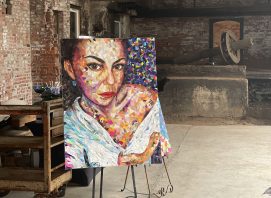 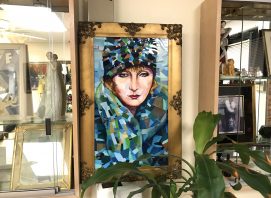